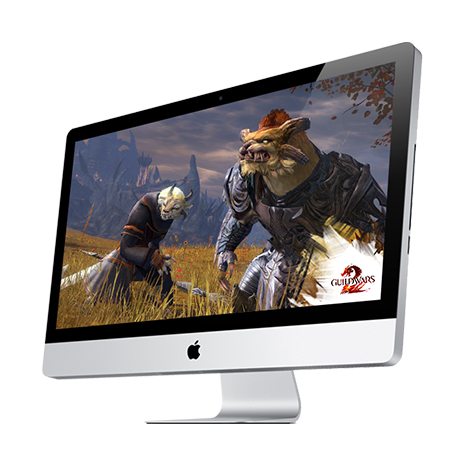 Today we’re happy to announce another major milestone in the development of Guild Wars 2: going forward, ArenaNet will also be supporting the game on Apple’s Mac OS X. The Mac Beta client is available immediately for all Guild Wars 2 players. It shares the same features and connects to the same live game servers as the PC client. Anyone who purchases Guild Wars 2 can now play it on both PC and Mac.

Bringing Guild Wars 2 to the Mac is huge for us, because it introduces the game to an entire group of players who are often ignored by game developers. The ability to play together with your friends is one of the underlying principles of Guild Wars 2, and providing a Mac client means that friends and guildmates can play together regardless of what operating system they favor.

On top of it all, ArenaNet staffers are big fans of Macs. We offer them as part of our employee laptop subsidy program, and our president Mike O’Brien is rarely seen without his Mac laptop. We’re as excited as anyone to play Guild Wars 2 on OS X.

The Mac Beta is available to anyone who has purchased or purchases Guild Wars 2. All you need is an active Guild Wars 2 account to download the Mac Beta client. Just log in to account.guildwars2.com and click Download Client to get started. If you have any questions, check out our Mac FAQ.

Keep in mind as you play the Mac Beta that it is a beta product. Performance and system requirements aren’t finalized. Review the beta hardware specification, and understand that your overall experience will be better when we release the final version. Even though it’s a beta, the Mac client does connect to the same live environment that the PC client connects to.

To bring Guild Wars 2 to the Mac, ArenaNet worked with our partners at TransGaming, whose Cider technology allows us to mirror the game experience as closely as possible between the PC and Mac. This means that future updates to Guild Wars 2 will be available for both platforms simultaneously.

So whether you’re a PC or a Mac, or both, we’ll see you in-game!