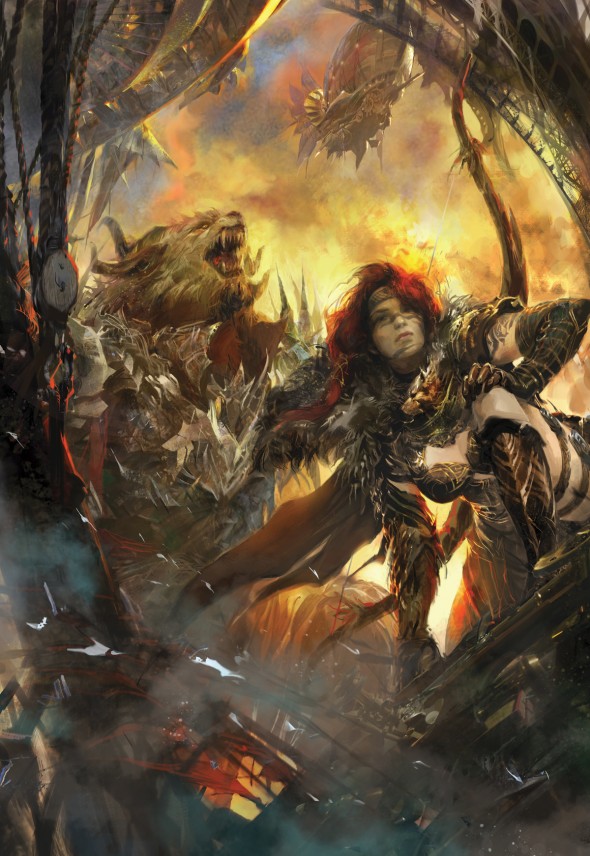 We’re going to get to know new ArenaNet concept artists and their work a little better in this weekly series of interviews. But today, we talk with Concept Artist Team Lead Jamie Ro, an ArenaNet veteran whose work has been instrumental in shaping the aesthetic of Guild Wars 2.

Q: You’ve had a lot of experience outside of gaming as a commercial artist and illustrator. Has that had any influence on your concept art? Jamie: I started my career in Auckland, New Zealand, where the industry there is much smaller in comparison to the States. This meant I had to wear many hats as a commercial artist rather than specializing in just one thing and developing in one area. In Auckland, I worked for a local animation studio as an illustrator/concept artist and worked as a freelancer on the side. I worked on everything from graphic design to texture mapping to coloring 2D background for kid’s TV shows. Often the turnaround for each project was ridiculously short; you had half a day to produce something as opposed to having 5 years to develop Guild Wars 2!

Still, I thoroughly enjoyed each day working there. Every new project is a fresh new start and I got to explore something new with every job. I was rewarded with great friendships and just the privilege of working and living in such a beautiful city.

But to answer your question about that commercial experience helping with my concept art, I would have to say it really hasn’t had a lot of influence. The skills you need to design a logo or work in QuarkXPress don’t transfer well into doing a fantasy concept piece. I had to work hard to develop a new style to get a fresh start here in the States, but to be honest, that wasn’t really a hardship— I love to draw and it’s been a joyful journey to get here. Q: I noticed that you work in black and white a lot. Does working without color allow you to focus on design and form more?

Jamie: Every artist has their particular strengths and weaknesses and I have to say, color has not been my forte. I start off with a black canvas and see what I can make out of it. Sometimes I get color, and sometimes it’s just too much work!

Q: Now that Guild Wars 2 has launched, what are you looking forward to in the year ahead?

Jamie: What keeps me motivated is the mastery of craftsmanship more than the subject. I am privileged to work with some of the most talented people in the industry, and as long as they are around, their support and friendly competition keeps me going regardless of the tasks. Q: Art Director Daniel Dociu has made a point of hiring a very diverse team of artists with a variety of influences and styles. What do you think the benefit is of having such a diverse, eclectic group of artists?

Jamie: I think an artistic style should be viewed as an important tool but not as an end goal. We have hired people based on their talent and not by how well they match with a pre-established Guild Wars art style.

We want people who can do more than mimic the work of previous artists. A good commercial artist masters his or her art as a tool for communication to the viewer. Whether your goal is to tell a story or evoke an emotion, a talented artist can achieve that, regardless of their individual style.

Also, having a diverse team keeps things interesting and fresh for the game. Guild Wars 2 is an ever evolving world, and by hiring people from all walks for life, we’ve established one of the strongest concept art team in the industry. Jamie: While I can’t speak for other studios, at ArenaNet the role for the concept team will be to support the growing world of Guild Wars 2 now that we have gone live. We’ve been working on various initiatives, providing concept support for upcoming in-game events, and new items for players. I can’t really go into a lot of details, but suffice to say that the strength of our concept art team is evidence of the studio’s commitment to adding new and exciting content for Guild Wars 2.