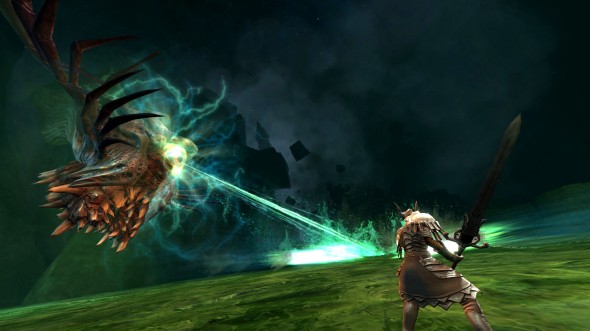 Greetings citizens of Tyria! My name is Linsey Murdock. Some of you may remember me as the Guild Wars Live Team Lead before the lovely and talented John Stumme took up the cause so I could work on other projects. As a game designer for Guild Wars 2, I primarily work on crafting and items, which is why I am here to talk to you today about some exciting new features coming up for items progression that my team has been working on.

As we watch Guild Wars 2 mature in its Live environment, we have found that our most dedicated players were achieving their set of Exotic gear and hitting “the Legendary wall.” We designed the process of getting Legendary gear to be a long term goal, but players were ready to start on that path much sooner than we expected and were becoming frustrated with a lack of personal progression. Our desire is to create a game that is more inclusive for hardcore and casual players alike, but we don’t want to overlook the basic need for players to feel like they are progressing and growing even after hitting max level. Adding item progression is a delicate process normally undertaken in an expansion, but we feel it’s important to strive to satisfy the basic needs of our players sooner rather than later.

We have always worked hard to create a sense of satisfying progression rather than gear grind and this new item progression initiative is no exception. By adding challenging new combat mechanics to end-game content and ways to mitigate those mechanics through gear progression for high-end players, we can add personal progression without making the game feel like an endless treadmill of gear that is just out of your reach. Original Guild Wars fans may recognize that we took a familiar approach to our new progression. The first end game mechanic we will introduce is Agony, which will be encountered in the Fractals of the Mists dungeon, and is mitigated by Infusions.

In the upcoming Fractals of the Mists dungeon, we’ll introduce a new monster condition called Agony.

This extremely dangerous condition ticks percentages of player health away and can’t be cleansed by normal means. Players who wish to delve deep into the Fractals will find that Agony makes progress increasingly difficult, until they reach the point where some defense against this condition is a must. The only way to mitigate Agony damage is by building up resistance through Infusions, a new type of upgrade component that can be acquired in the Mystic Forge. Infusions are a special new type of Upgrade Component that can only be slotted into special Infusion slots on gear.

There are multiple types of Infusions and Infusion slots. In November, we’ll introduce Offensive, Defensive, and Omni Infusions of Fine rarity from new Mystic Forge recipes. Infusion upgrade types must be paired with their like slot, with the exception of the rare and versatile Omni Infusions which can be slotted into any type of Infusion slot.

For now, Infusions slots can only be found in gear of a new rarity type: Ascended.

In November we’ll unveil the first Ascended items. This new rarity type falls between Exotic and Legendary on the spectrum of rarity and has slightly higher stats than Exotics.

Ascended gear works a little bit differently than other gear types. The stats and functionality normally added to gear through upgrade components are actually built into Ascended items. Instead of upgrade slots, Ascended gear has Infusion slots, and rarer versions of the items also come with additional Agony Resistance built into them. Players will be able to acquire Ascended Rings in the Fractals of the Mists dungeon, and Ascended items worn on the back can be acquired through special Mystic Forge recipes. The Future of Items Progression

This is just the beginning. In November, we’re only adding the first level of Infusions and Ascended Rings and Back slots, so that leaves us a lot of room to build upon these levels of Item progression in future content.

As we release more new end game content in the future, you’ll see more Infusions and Ascended item types being added to the game.  Eventually, you’ll be able to kit yourself out with a full set of Ascended gear and high end Infusions to help give you the edge in end game content.

The new additions in November are just the start of our item progression initiative. We’re going to add tons of new high-level content to Guild Wars 2 in the future. As we introduce the new high-level content, we’ll also roll out complimentary Ascended and Legendary items (to say nothing of the other rewards you can earn by playing the content).

I hope you are all as excited about these new items as I am!