Structured Player vs. Player: The Iceberg 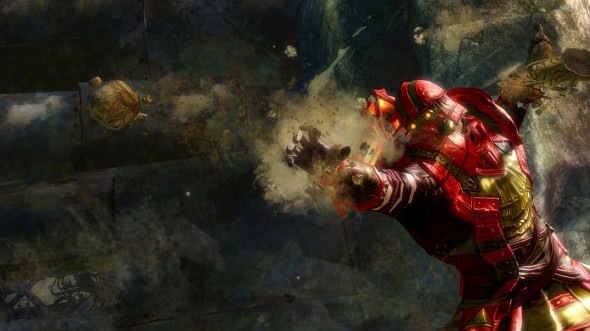 Jonathan Sharp on the (Near) Future of Guild Wars 2 PvP

Here at ArenaNet we’re passionate about our game.  Like… sickly passionate. We want Guild Wars 2 to be good, and we want our players to enjoy it. Even if true perfection is an unreachable idea, we still want to strive for it, dammit!

Due to that desire to make the best game possible, we iterate. A lot. We take an idea, we build it, we test it, we make changes, we test it again, we add to it, we test some more, we take something away, we test again…. you get the idea.

So when we say we’ll show something “when it’s ready,” we really mean it. We don’t want to talk about it until we’re ready to show it, because it may change.  We may come up with a better idea, we may receive data that shows why a feature needs to be tweaked, or we may find a new solution in the course of testing that’s superior to our original idea.  That’s how game development works.  We don’t want to talk to you about things too soon, and then have those things change.  We don’t want to make empty promises to you.  We like to talk about things once they’re ready. Do we get everything perfect?  NO WAY. J  But it’s still a goal.

Structured Player vs. Player (sPvP) is a core feature in Guild Wars 2, and it’s quite massive.  The features we want to add to sPvP, to use an analogy, are like an iceberg…It’s more than we’ve been able to say so far.  And like all our other game types, we talk about sPvP features when they’re ready. We shipped the game with some key features, but a lot of features we wanted to show at release simply weren’t ready.  So now we’d like to start talking about some coming features that, until now, have been beneath the surface of the ocean on our metaphorical iceberg. Free automated tournaments are what you can play right now.  Many players (according to our numbers) have tried them out and seem to enjoy them. The free automated tournaments are meant to be friendly to new players, allowing people to randomly form teams and try to win some cool loot.  You can even play them solo, and get auto-matched with other players who don’t have a full team.  The idea is that they’re open to anyone, and should allow new players to meet other new players.

As you can see, the top four teams will get glory (which they can spend in the Heart of the Mists on aesthetic rewards), rank points (which help you become more awesome as you rank up in sPvP) and different types of reward chests.

After players have become used to the game and learned the basics of sPvP, we figure they’ll be ready to test their skills by challenging the other experienced players out there in paid tournaments. These tournaments are similar to free automated tournaments, but with a couple key differences.

As the name implies, paid automated tournaments have an entry fee. You’ll need tickets to enter a paid tournament, which you can purchase in the gem store, find in reward chests from free tournaments, and receive when you rank up!

These tournaments reward ALL teams that play in them, and offer better rewards on average than free tournaments. Successful teams can earn excellent rewards from paid tournaments, but you’ve got to be good to finish in the top prize slots. We expect that more experienced PvP players will start to migrate to paid tournaments because the risk/reward is much higher than in the free automated tournaments.

There is also no matchmaking in the paid tournaments.  You have to come in with a premade team, which means the teams will ALL be organized teams – you won’t have premade groups fighting pick-up groups as you would in free paid tournaments. Alright.  You’ve got your build.  You have your 5-person team, and you’re really good at working together.  You want a place to train.  You want a place to challenge other teams (and by challenge, I mean you wanna slap down those punks who were talking trash in that tournament you just played!!!).  You want the ability to play only the maps you want to play. You want a place where you and your friends can play without random people jumping in on the game.

What do you do?

You rent a custom arena.

Custom arenas are special PvP maps, rented by players, that will allow you to set up passwords, host scrims, and test strategies with your team.  This will allow you to challenge other teams, work on your builds in secret, and test your skills 1-on-1 with friends.  You can open the server up to everyone and set the map rotation you like best, or keep your arena password-protected so it serves as your private training ground.

We expect custom arenas will be a massive boon to the sPvP community. These rentable arenas will allow you to break up into teams, have a place to call your own, and allow you to organize your own private tournaments. You can customize the arena the way you want it (within established parameters), and you can select which maps to play on.

Custom arenas are one of the key features that will help GW2 sPvP grow, but it’s not the only one.  Which leads us to…

Why These Features and Not Others?

We’re always listening to our player base, and taking their feedback and ideas into account. We watch the forums on multiple sites. We read the comments on Guild Wars 2 articles.  We take off our guild tags, sit in crowded maps in game, and eavesdrop on your conversations and unfettered opinions.  Who watches the watchers?  We do.

We hear a lot of the things you’ve asked for.  And the truth is, a lot of the features you want will be added in the future. Just because we don’t do everything you want, exactly when you want it, does not mean we aren’t listening. There’s a ton of stuff we want tell you about – just not yet. The features we’re adding now will go a long way in helping the sPvP community grow, but there’s still more to do. Again, we don’t like talking about features until we’re ready to show them.  We don’t like empty promises, and we know you don’t either. But, at the same time, we do want you to know that other features are coming!  We’re trying to strike that balance in this blog post.

So why are we adding paid tournaments and custom arenas first? Why not other features first?

Custom arenas: We knew that adding custom arenas was going to be a big deal for the community, so we prioritized it internally as a must-have feature.  There are other features we’ll be adding later that may be just as important as custom arenas, but we wanted to focus on getting players the ability to rent arenas before we added any other eSport features. The Rest of the Iceberg

We’ll be adding a lot of things down the road, but we’re not going to talk about them yet.

We know leaderboards are important.

We know the ability to spectate matches is important.

We know larger tournaments are important.

We know streaming is important.

We listen to you and we hear what you’re asking for. We want to see eSports grow worldwide, and it’s a big part of how we think here at ArenaNet. We design sPvP maps with commentators in mind.  We think about streaming and how our game will do on streams when being learned by new players.  We watch eSport replays/streams in the office. We watch GW2 gamecasts on Youtube. We think about how people will organize tournaments (small and large) within custom arenas. We talk about eSport matches while we’re at lunch. We think about how to best get new players into the game, while also making sure professional players have a way to grow their fame. We think about the best way to show high-level matches to the masses. Really…we just think a lot about eSports. Not just for GW2, but we think about growing eSports around the world.

Paid tournaments and custom arenas will be coming online in the near future – paid tournaments will come first, followed by custom arenas.  And when we’re done with those, we’ll start working on other features to add. Guild Wars 2 competitive PvP is taking its first steps, teams are starting to organize, and some key features are about to start showing up.  But are we done working on it?

The way we see it, Guild Wars 2 sPvP may be shipped, but it’s far from finished.