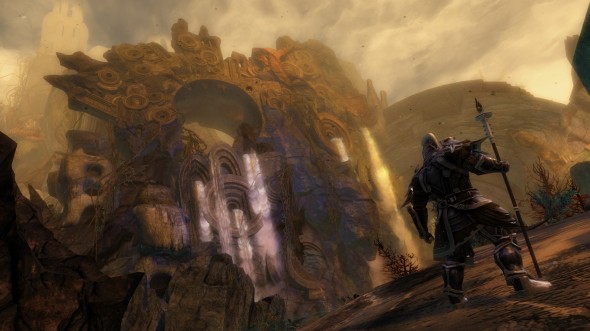 In the past, we’ve talked about how in Guild Wars 2 we designed the game to avoid a common problem in many MMOs: grinding through chunks of boring, repetitive content to get to the occasional pockets of fun. With Guild Wars 2, we wanted the entire gameplay experience to be something that players enjoyed, regardless of how much time they could dedicate.

When we looked at the concept of “endgame” for Guild Wars 2, we designed it the same way. We didn’t want the endgame to be something you could only experience after a hundred hours of gameplay or after you reached some arbitrary number. We wanted it to be something that players got to experience every step along the way, spread out across the entire world of Tyria, so we’ve introduced game elements that you’d normally associate with “endgame” at every level and every possible opportunity.

Starting with each player’s first introductory adventure, we pit them against large-scale boss encounters—one for each race—just to whet their appetites and give them a taste of the boss battles to come. We wanted to show players that this really is just the beginning. We want the experiences that players will have while progressing through the game to be a journey that they take with their character, something that they will remember and cherish. Sure, once your character reaches max level, we’ve created new and interesting ways to challenge you as a player, but we didn’t want to force you to master an entirely new subset of the game.

Our goal with Guild Wars 2 was to continue to build upon what we’ve shown you before while finding new and interesting ways to engage you as a player, regardless of your level. Each new experience, new dungeon, and new giant boss is a chance for us to layer on more difficulty, or teach you an interesting aspect about your profession and what you can do when you combine forces with other players. Guild Wars 2 is a game about banding together with friends and complete strangers to accomplish great things in a world ruled by uncertainty and challenge.

“…we’ve introduced game elements that you’d normally associate with “endgame” at every level and every possible opportunity.”

For people who love structured and difficult content, we developed the explorable mode for our eight dungeons. A dungeon’s explorable mode has at least three different paths that players can choose to conquer—and each path is a five-character delve into tough content that we designed to push the limits of teamwork and communication.

For people who enjoy massive encounters where large numbers of players band together to take down epic monsters, we created our giant bosses, which are scattered throughout the world. These massive dynamic events usually come at the end of one of our meta-event chains, and they reward players with a challenging encounter and a loot chest for their accomplishments. You’ve already seen a few of these behemoths in our intro story, but later in the game, these giant bosses really come at you with gloves off. But the concept of “endgame” isn’t restricted to a few specific encounters and monsters; we have multiple paths and a variety of different content for players of all kinds. For people who enjoy crafting, we added legendary weapons that use rare components gathered from multiple game types—they’re created using the Mystic Forge. The final reward at the end of this epic crafting path is a visual masterpiece: a weapon with a unique appearance and special effects that are sure to make you stand out in a crowd.

For explorers and completionists, we added the idea of “world completion,” which involves completing renown regions, Vistas, skill challenges, waypoints, and points of interest for each of the maps in Tyria. We keep each map interesting thanks to the level adjustment system, which removes the ability for higher-level characters to enter lower-level maps and trivialize the content. You’ll still be more powerful in lower-level zones because you have more traits, skills, and gear, but the level adjustment system will insure that the monsters give you a proper fight.

With all the branches in the personal storylines and the sheer number of different stories available to players of each race, Guild Wars 2 has a lot of replayability for those looking to explore Tyria from a different perspective or experience new stories.

As players reach the max level of 80, the dynamic events become larger, the battles more spectacular, the circumstances more dire. Each of the high-level maps in the corrupted land of Orr contain battles on a grand scale against Zhaitan’s forces, an epic war with shifting fortunes and frontlines. As you can see, we’ve taken the idea of “endgame” content beyond the traditional model and have infused it in all levels of the game, while adding enough variety to keep players with a wide array of interests engaged.

The launch of Guild Wars 2 is just the start. With the game now out in the hands of the players, we can focus our efforts to adding new types of events, new dungeons, new bosses, new rewards, and new places for players to explore. Together, our journey is just now beginning, and I hope to see you in-game.